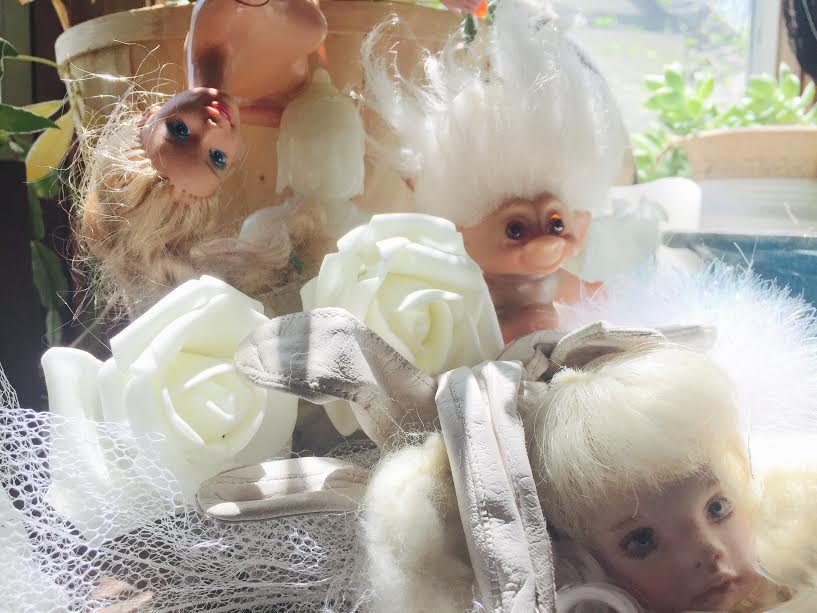 Growing up, I was one of those girls who liked dolls. I had dozens of them, fragile, pretty things. Things I could not really play with, things that were too delicate to touch. Things with sparkling eyes, silky dresses, and knowing looks that made me wonder “Maybe she is alive.”

My brother and his friends hated my dolls. They used to tease me. “So girly!” They would even go so far as to leverage the insult to exclude me- “Go play with your dolls!” Ah, siblings.

Maybe boys don’t like dolls, but as I got older I came to learn that MEN do. I had a professor in college who liked to call me “Dollface”. At twenty-two I had boyfriend (much older than me) who called me “Babydoll”. I loved it. And while there is a ferocious lioness inside disgusted by the disempowering tone that “Doll” implies, the truth is I still love being a Doll. Go ahead and call me Babydoll. I’ll probably blush cutely.

Yet, as I find my self more deeply rooted in the potency of  WOMANHOOD, I wonder- how has the term “Doll” come to be so eroticized? Why are there dozens of burlesque troupes with variations of that moniker?  Perhaps the image ingrained in the male imagination is of something silky and fragile, something that doesn’t speak but always looks lovely, something that can be put on a shelf- a plaything that may, or may not actually be alive. But perhaps there is more to it than the simple eroticization of what is innately a powerless girl image.

The truth is, dolls are one of the most ancient forms of art in human culture. From early dolls made of stone and bone, fur, corn husks, mud and sticks to the glammed up fashion megaliths and robotic super toys of today, dolls have been a staple playthings since the dawn of humanity. 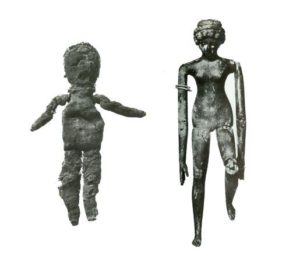 But dolls have meaning beyond the musings of children. Humans have fashioned dolls in the likeness of every known spirit, deity, guardian or protector since the beginning of belief.  Folklore across the world has been depicted in doll form, ritualistically representing the spirits and entreating them to offer their guidance and protection. Dolls have always been used in ritual, magic, and religion. Well beyond the Loas of voodoo, carved images of Buddha and Vishnu accept offerings; the crucifix guards its bearer.

While Barbie and the Mother Mary may have little in common, both represent an image of perfection, a guardian over a certain realm that, through prayer or play, we as humans experientially tap into. We project ourselves onto the image of that super being. We play with these items with ritual adoration, praying to the power that they oversee. We animate these objects in ritualistic ways, and through them, our prayers for health, wealth, strength, fertility, nurture and insight are enlivened. 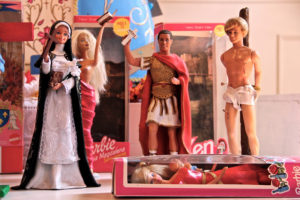 So when the term Shamanic Dolls emerged (as many wondrously mystical things do) from the mouth of my fellow Shamanic Doll- Earthaerial Kartwheel, nothing could be more clearly right.  Shamanic Dolls have been utilized in ritual and rite by many who walk the golden path to enlightenment. Shamanic Dolls are often stand in reminders of the unseen world, holding protective ground and opening  portals to the spirits that desire to come through.

I am not lost to the cliché of the term “Shamanic”. In fact, I see it tossed around with absurd seriousness. I personally have no desire to preach. I am merely a doll, a likeness of a dream that only you can have. My stage is an alter, and on it I am a plaything, a power object for our collective prayers. If you wish to leave an offering we will deliver it.

It is your journey.

Melinda Cary is a mother, poet, playwright, performer, and Real Estate professional. She is the director for Shamanic Dolls and has a background in production. For more information on Melinda’s writing and/or directing email info@shamanicdolls.com.